Also, about “The Host.”
http://cdn2.escapistmagazine.com/media/global/movies/player/flowplayer.commercial-3.2.12.swf
The Escapist : Escape to the Movies : G.I. Joe: Retaliation
March 27, 2013Leave a comment

The “X-Men” franchise is in a weird place, being the only major modern comic franchise from the pre-“Avengers”/”Dark Knight” era (aka the “We Haven’t Quite Figured This Out Yet” age) to still being kicking without a reboot/remake etc. The best one is still “First Class,” and not uncoincidentally that’s the one that was most free to jettison the late-90s baggage still attached to the series.

In any case, there are trailers now for “The Wolverine,” Hugh Jackman’s second chance at keeping the only character to date that anyone seems willing to buy tickets to see him play relevant in a solo series. Neither one is especially encouraging (not “bad,” just rote and dull looking) but here’s the international version, which is the less-crummy of the two…

This is, of course, based on the “Wolverine fighting Ninjas in Japan” business from the 80s, and it’s kind of amusing seeing that quintessentially Reagan-era motif of seemingly-modern corporations in “exotic Japan” being hives of sinister intent swarming with Ninja intrigue and present-day Samurai unironically transposed to the present (this takes place after “X-Men: The Last Stand.”)

Part of me wants to complain about Wolverine somehow having reverted back to wandering around with his Depression Beard after his supposed development into Responsible Leader Guy in “Last Stand.” I imagine the handwave will be “he’s mad about what happened to Jean Grey” (get in line, bub – I had to pay to watch that piece of shit) but whatever – Jackman needs to eat in between his more interesting movies that people don’t go to see, and it doesn’t look terrible, so… yeah.

http://cdn2.escapistmagazine.com/media/global/movies/player/flowplayer.commercial-3.2.12.swf
The Escapist : The Big Picture : Comics in The 90s: What Happened?
March 26, 2013Leave a comment

If you were at Escapist Movie Night at PAXEast this past weekend (or you caught an earlier reveal during the Desert Bus charity event) you already know about this, but for everyone else it would seem the cat is out of the bag…

So! I’m writing a book. Or, rather, I’ve written a book and – barring any unforseen disaster – it will be coming out soon. It’s a book about video games, and is being developed with (and will be sold exclusively online through) fangamer. If I had to describe it as anything it would be a book of game criticism; though not of a kind I’ve found anywhere else.

Further details (all of which are, it goes without saying, wholly subject to change) after the jump…

At this time the book itself doesn’t have a title I can officially announce or cover-art, but the main text of the thing has been written. My “big idea” was to take the longform “scene-by-scene” (or shot-by-shot) analysis often applied to book-length criticism of movies or plays to gaming by, essentially, novelizing a “Let’s Play.”

The approach: I would play all the way through a classic game – every level, every enemy, every item, the whole experience – and analyze everything about it as I went: The mechanics, the layouts, the art-design of the sprites, the aesthetics of the backgrounds, the music, the known history of the production, cultural references and context, etc. In addition, since it’s my position that the effect our moods outside of gaming effect the interactivity of the medium and vice-versa, the “narrative” of playing the game would be intercut with the “narrative” of what was going on in my life during the play-through.

I chose “Super Mario Bros. 3” to be the subject, mainly because it’s my favorite game but also because it’s the best possible candidate: A classic game, part of the most famous series in the entire medium, lengthy, linear and enduringly popular enough that a sizable portion of a prospective readership would be familiar with it. It ultimately took on a greater significance, though, as the initial play-through itself wound up coinciding with my preparations for moving out of the home I’d grown up in – in other words, playing this game in the house I’d first fallen in love with it for the last time.

So… yeah, this is “labor of love” stuff. But I’d be lying if I said that I wasn’t proud of the idea that – to my knowledge, at least – this kind of in-depth analysis hasn’t been done at this scale for a single game. For good measure, it also includes a history of the franchise and my own personal history with it.

At this time, all I can say about release dates is that we’re angling to have it available within the next few months (my goal is to have some copies ready to sell in-person at SGC – fingers crossed) but I’ll be updating here as more information re: dates, cost, title, etc is made ready for public reveal. I’m nervous but excited about the whole process… I just hope enough of you folks A.) give it a shot and B.) like what you find.

Deadline is reporting that all four roles have now been cast for the Michael Bay-produced, Jonathan Liebesman-directed “TMNT” movie; which is once again moving ahead with no word on what they’ve done about the terrible screenplay that helped scuttled the project earlier. The four will join Megan Fox as April O’Neil, and apparently the notion that the turtles will be realized through motion-capture CGI is supposed to be news – I thought that was just assumed from the very beginning…

LEONARDO: Pete Ploszek; a virtual unknown fresh out of USC, only prior credits are TV guest spots.

DONATELLO: Jeremy Howard; onetime child-actor turned recurring TV mainstay. Has kind of a DJ Qualls thing going on, that plus the motion-capture leads me to believe we’ll be looking at the turtles being somehow “matched” to their actors design-wise (re: Donatello leaning heavy on the geek/nerd angle) rather than being near-identical save for their masks and weapons. Not sure if that sounds like a good idea or not – part of me feels like the guys being differentiated primarily on personality is why they were strong(ish) characters…

I assume we’ll find out whether Liam Neeson or Morgan Freeman won the knife-fight over who gets to collect the quick paycheck for voicing Master Splinter (I have no idea if that actually happened, you just kind of have to assume they were among the first guys offered the part at this point.)

Beyond that, the rest of the casting should tell us how much (if anything) of the infamous earlier screenplay has survived: Casey Jones was a teenager in that version (and the lead role, think Sam Witwicky again,) Bebop, Rocksteady and Krang all featured and Shredder was an American paramilitary leader named Col. Schrader; so hearing the word “Shredder” or the casting of a Japanese actor would be indicators of substantial change (as would an adult or non-present Casey Jones). Would like to see B&R (and Krang) survive, though – pic will probably still be shit, but getting to check seeing those two in live-action off the “always wanted to see” list would be a solid consolation prize.

A guide to my home city for fans visiting for the big show. Enjoy!

A quick object lesson in the way that language can be abused.

Jerks respond by calling her a bigot and censor.

Nowhere in Pascal’s (admittedly, let’s face it, pie in the sky “nice idea”) suggestion as to how the pro-equality fellow execs in her audience could use their positions to help the cause was there a call for censorship, or a rule, or even some kind of official position. It’s a simple call for studio bosses with their fingers on the greenlight button to incorporate “being less homophobic“ into the shaping of screenplays under their production – which is already their job!

Taking a pencil/red-marker etc to screenplays is what they do, and usually for much more cynical/financial reasons – “let’s use that power for good” should not be a controversial request. But because it can be made to look like “liberal hypocrisy” in a meant-to-be-skimmed (you’ve got to read close to find the qualifying “not in so many words” in Nolte’s screed) blurb on a site built on confirmation-bias and ginned-up non-issue outrage.

It’s a goddamn masterpiece, the first genuine must-see of 2013 and may be Harmony Korine’s first truly great movie. No, really – there’s no joke there. Go see this. Now.

“Intermission” talks caveman movies, because of “The Croods” (which is actually pretty good.)

Oh, and come see ME at PAXEast! I’ll be around the con all weekend, and at the Escapist Movie Night panel at 9:00pm on Saturday in the Merman Theater!

There’s a new international trailer for “Star Trek Into Dark Knight” that includes some new footage, most notably/curiously a seemingly gratuitous glimpse of Alice Eve in her underwear that seemingly exists just for the benefit of screencaps. Turns out, it’s JJ “Mystery Box” Abrams playing more advertising games with us, as there’s actually a hidden URL in the background of the scene that leads to… a new poster.

Okay, so… I’m pretty-much okay with being “the guy” who still not really onboard with Abrams in general and his version of “Trek” specifically; so I get that anything remotely critical I have to say will be summarily dismissed. Fine. If I couldn’t put up with that, I wouldn’t be in the business. The trailer is pretty good, though I’m not any more persuaded that the problems of the previous installment won’t simply be exacerbated.

Also, I understand that this is some kind of sacrilege because… well, because he’s “Sherlock,” pretty-much… at this point I’ve got to say it: If not for Cumberbatch’s reigning-BBC-pinup-dude status and the obligatory Abrams obfuscation the “mystery villain” here would seem spectacularly boring: Yet another lone chaos-bringer ranting about how unstable everything actually is and how he can’t wait to show us and blah blah…

I know, I know, “it’s not my father’s Star Trek,” and I’m sure whatever he ultimately turns out to be will be interesting on some level… but taken at face value it’s hard to ignore that we’re being asked to pysch ourselves up for The Enterprise Crew’s epic showdown with… Angry Man In Black Trenchcoat. Doesn’t exactly inspire awe and wonder, is what I’m driving at…

That having been said… my takeaway from this poster is that – moreso than any before it – if you take away the title down the bottom it would be almost impossible to discern that this is supposed to be the poster for a “Star Trek” movie. Is that a problem? Is that a bad thing? I don’t know. It feels like it SHOULD be, but I don’t know. Thoughts? 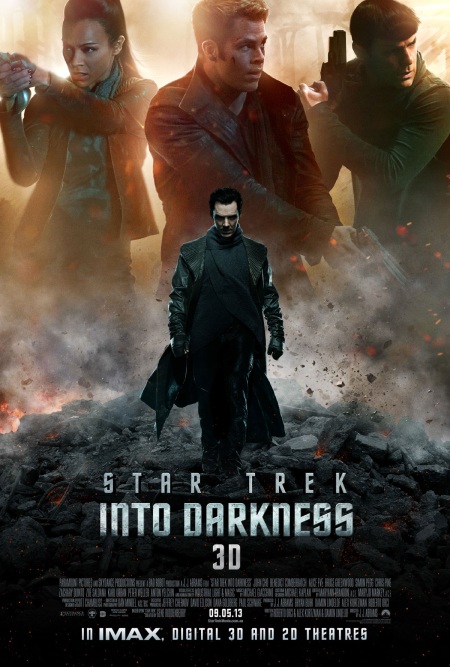 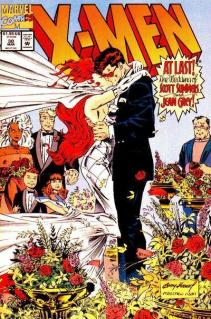 Yeah, I know the accompanying image doesn’t precisely fit. Cut me some slack, it’s the only searchable-image for “X-Men Wedding” that doesn’t seem like a lame tie-in to the corny gay joke every other outlet ran with.

Anyway, in what might be the niftiest piece of tangentially-nerdy news of the year so far, Patrick Stewart is marrying New York jazz musician Sunny Ozell. And, since the wedding is set to be held in Massachusetts, they’ll be taking advantage of the state’s one day marriage-designation law (which allows a friend/relative of a couple to be temporarily empowered to legally perform their wedding) the ceremony will be officiated by Sir Ian McKellan; whom Stewart is set to once again be co-starring with (as Professor X and Magneto, respectively) in the upcoming “X-Men: Days of Future Past.”

So… that’s pretty cool. Congratulations to all involved.