Many of you have already seen this, but just in case: here’s what happens when Suda51 (creator of “No More Heroes” and “Killer 7”) and James Gunn (writer/director of “Sliver” and “Super”) team up to make a video game that resembles an anime-infused parody of “Buffy”…

I think what makes this perfect is the rainbow/sprinkle stuff – like it’s rubbing the absurdity of the “hot chick monster slayer” fetish in the faces of it’s usual intended audience.

Republican activists trying for some outreach into the black community? Good thing, in theory. 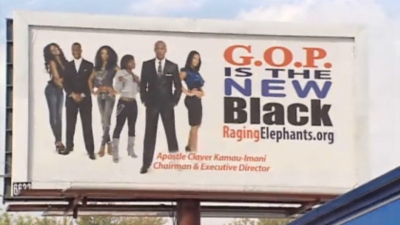 Republican activists trying for some outreach into the black community through retro-terrible billboard advertising a website whose domain name means “angry giant animal from Africa?” Good thing… for anyone running against Republicans in the near future.

I don’t know if there’s a “scoop” more pointless in the world of movies than the “official synopsis” of a movie whose premise is already know to everyone; but studios keep doing them and we keep acting like it’s a big deal.

Comicbookmovie claims to have the “official synopsis” of “The Dark Knight Rises,” in any case. No surprises, reveals or anything like that; though it’s interesting that Batman and Bane are referred to as “Batman” and “Bane” while Catwoman is simply called “the enigmatic Selina Kyle.” As ever, I’d be surprised if we ever hear the word “Catwoman” spoken in the film other than as a side joke about how ‘silly’ it would be.

“Intermission” is about “Anonymous,” which is kind of excellent and shouldn’t be missed if it’s limited release plays near you.

http://cdn2.themis-media.com/media/global/movies/player/flowplayer.commercial-3.2.7.swf
The Escapist : Escape to the Movies : In Time
October 27, 2011January 10, 201711 Comments
It’s worrisome that they look like dead-ringers for the real thing; because it suggests they went for “looks like” over “can do the bits.”

Below, the trailer for the downloadable XBLA/PSN title “War of The Worlds” – which adapts H.G. Wells’ original version of the story into the format of a 2D sidescoller leaning heavily on the “alien lights in pitch-darkness” visual scheme. Yes, please.

Sony and Ubisoft’s movie division (STILL kind of amazed that of all the game companies to start their own full-on movie arm Ubisoft was first out of the gate…) have reportedly registered a buttload of domain-names that all point to the all-but-innevitable announcement of a movie based on the “Assassin’s Creed” video games.

For a change, THIS is a “recent” game series I’m actually pretty interested in seeing moved up to the big screen. It’s got a really interesting setup (spoilers for anyone who hasn’t played the games after the jump) a setting that isn’t done to death in either medium and a nifty visual aesthetic. The big question is… how much of this actually gets filmmed?
SPOILERS for the games from here on out!

See, the “everybody knew” (from the advertising) part of the first Assassin’s Creed was that you were playing as a Crusades-era assassin; which is interesting enough… but right off the bat the actual game threw you a wicked curveball – the story actually STARTS in the present/near-future, where an ordinary guy is being held prisoner by a secret organization who’re using Matrix-esque technology to dig around in his brain for “genetic memories” relating to a centuries-spanning conspiracy that involved his ancestor; the medieval assassin you play as in the game-proper.

Along with just being COOL, this structure also served as an ingenious handwave for the story to leap around from mission to mission and eventually from time-to-time – the sequel invovled a different ancestor and was set in Rennaissance Italy. (It was also helpfully in getting me to maintain a state of “give-a-shit;” as I tire of “go here, fetch this, go there, kill this guy” open-world gameplay rather quickly on it’s own.

So, here’s my questions: Do they keep the same “flashback” structure? Do they start in the Crusades or later? Both? Will the really, really, REALLY big “wait… WHAT!?” business from the end of the sequel get dropped much earlier? One thing that damn near goes without saying – the same actor will almost-certainly be cast as “present guy” and “past guy,” and I’d be unsurprised to see the film do A LOT more skipping between past and present – as it is, the game story (yet unfinished) seems to be leading toward Desmond (“present guy”) taking up his family legacy in a modern context… maybe the film will get there right off the bat – or at least for the finale?

I feel like the “moment” has passed for a “Sin City” sequel. The gimmick more-or-less got well covered by the first one, and Frank Miller’s innability to avoid being a giant cockbag has tainted pretty-much everything associated with him – even stuff from before 9/11 broke his brain.

That said, THIS is made of win.

Because Paranormal Activity 3 and Three Musketeers weren’t shown to critics, that’s why.

Intermission is about animal movies.