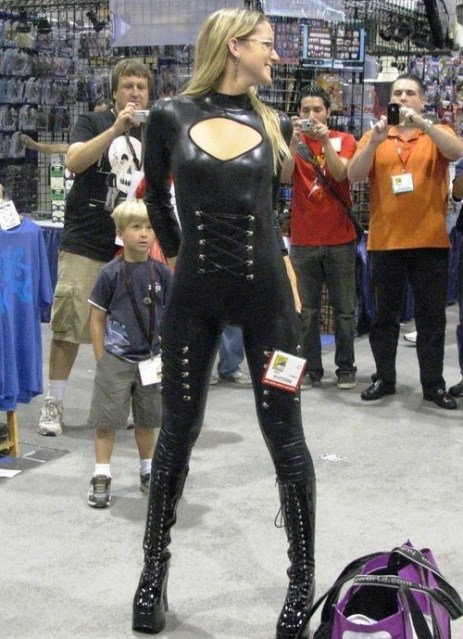 Pictured, bottom-left: Young boy, in the midst of what will be a defining moment of his adolescence.

“Liberace was gay” has finally been knocked the #1 spot of all-time celebrity “duh!” revelations, as Catholic-turned-atheist-turned-Christian-turned-whothehellknows author Anne Rice has evidently discovered that organized Christianity is – shockingly! – NOT all that welcoming to left-leaning feminists best known for sexually-explicit romance novels about bisexual vampires and BDSM-reworkings of fairytales. Wicked shock’a, as we say here in Boston.

In the midst of some “Intermission” comment reading/responding, it dawns on me that since physicality isn’t so much a concern when it comes to the potential casting for a “Doctor Strange” movie; one of the key questions would probably end up being VOICE – i.e., whom do you most want to hear speak dialogue like “By the Crimson Bands of Cytorak!!!”

With that in mind, perhaps a radical suggestion: 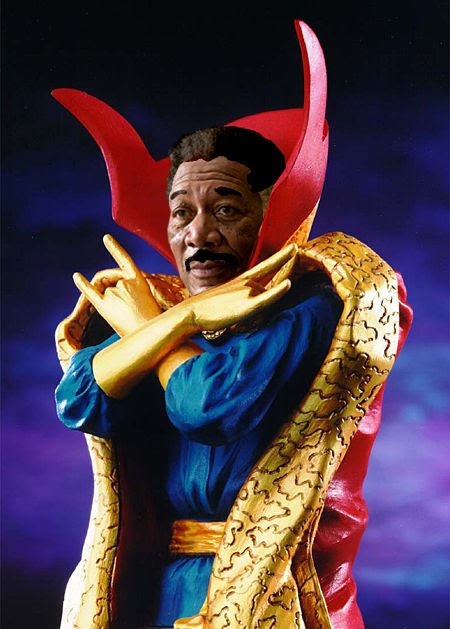 The week’s Intermission: “Film These Heroes.”

Who knows how long this will stay up, but The Pursuitist has a (non-embed) copy of the Thor reel that was shown at Comic-Con up.  So go watch it already HERE: http://pursuitist.com/arts/thor-comic-con-trailer-watch/

Looks pretty damn good if you ask me. The way it’s cut looks a lot like what the first “real” trailers will probably look like: A “story” trailer with lots of fanservice in the margins. It’s not quite the “holy shit!” of the first Iron Man trailer, but we do get to see how everyone “looks” under proper lighting and post-production, all the main guys in full armor and helmets, how the hammer fighting/throwing is being staged, what the basic story is (Thor depowered and busted-down to Earth, has to prove himself as a hero so he can get his hammer and powers back), how/where it “fits together” with Iron Man 2 and how Destroyer looks in motion. With a few moments snipped for time, this could (and SHOULD) be playing in theaters now.

Classic Animation buffs will, of course, note the irony of a Golden Age Hannah-Barbera character being presented in 33333DDDDD 😉

(intended for posting as a response in the Oliver Stone thread, posted on-page instead because it’s long-ish)

Anti-semitism is the original sin of Western Civilization. Scratch the surface of ANY extremism and you’ll find it down there somewhere. I’m told it’s more pronounced in Europe, where it has a longer and more socially-ingrained history, but it bubbles up here in the U.S. on either “side.”

ACTUAL American Jews, meanwhile, remain a largely liberal/Democrat voting base; though many American liberals (IMO) tend to be foolish and reactionary when it comes to appraisals of Israel/Palestine, as though they’re ideology won’t let them “process” the idea of a conflict where the rich nation is the “good guys” (re: democratic, primarily fighting on defense) and the poorer nation is full of “bad guys” (re: terrorism, civilian targets, religious bigotry); reflexively “siding” with Palestine without much regard for history. Though I hasten to add, it MUST be noted (by both sides) that The Palestinians are basically being “used” to wage a proxy war by outside-funded agitators at this point in the story.

One death is not “worse” than another in the broad sense, but the Holocaust IS a special case because of it’s circumstances and what it symbolizes: The Industrial Age – which was supposed to civilize the world – used to committ THE fundamentally uncivilized act. It was the first genocide-by-assembly-line. That’s important. Yes, Hitler DID kill more Russians – but that was a war with both sides taking casualties, something that’s been with us since the beginning. Horrible, but not unique.

That people still need the singular uniqueness of The Holocaust “explained” to them, and why so many can shrug it off as some kind of “overrated” atrocity kept alive for sympathy by the omnipresent “Israel Lobby” is why Stone is WRONG, and we DO need to keep focusing on it. Because some of us still just don’t get it.

And here we go again.

Oliver Stone has been on a slow slide into irrelevance ever since “World Trade Center” and “W” both more-or-less dissapointed, leading some to wonder if the famously erratic onetime visionary had lost more than a little of his mind. Apparently, in an interview with the London Sunday Times, he opted not to help his case.

In discussing a forthcoming documentary touching on the rise of Nazism, Stone laments a somehow-“outsized” focus on The Holocaust, which he blames on “Jewish domination of the media.”

And he didn’t stop there. Continues Stone:
“There’s a major lobby in the United States. They are hard workers. They stay on top of every comment, the most powerful lobby in Washington. Israel has f***** up United States foreign policy for years.”

Yeesh. What, was he reading all Mel Gibson’s press and feeling left out?

Shorthand auto-headline for pretty much every image coming out of Comic-Con in relation to the Marvel Films slate: “If This Is What It Looks Like… This Is Awesome.” See: Yesterday’s web-shuddering revelation of a certain Special Object being somehow involved in “Captain America.” (Note, since that story is a report on something that was publically shown at SDCC, I don’t know that it counts as a SPOILER or not, but just in case call this a light-warning.)

And then there’s THIS rather ostentatious-looking piece of handwear, which was apparently out on the floor along with the already widely-seen Captain America shield and Thor/Loki/Odin helmets. And, well, if this is what it sure-as-hell LOOKS like it is… 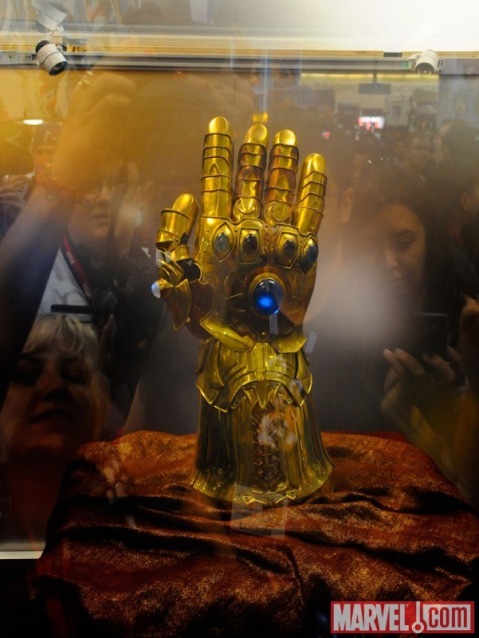 Fans don’t need me to tell them what they seem to be looking at. For non-fans: That’s almost-certainly a Marvel Universe MacGuffin known as “The Infinity Gauntlet.” Short version: Magic Glove inlaid with six Magic Gems representing absolute power over Time, Space, Mind, Soul, Reality and Power, respectively. If you’re wearing it, you’re pretty much God. Keeping this from certain bad guys is really, really important. So… it’s a more ostentatious “One Ring,” would be the idea.

Now, here’s why this should give fans something close to an intellectual-erection: While this is supposed to be a prop from “Thor,” The Infinity Gauntlet isn’t specifically a Thor element in the books. In fact, it doesn’t “belong” to any one hero’s series or continuity. It’s an “everybody” MacGuffin, most-commonly associated with (in fact, created-by) one of Marvel’s ultimate “everybody” Big Bads: THANOS.

Created by “cosmic”-specializing artist/writer Jim Starlin, Thanos is a nearly all-powerful alien conqueror who is “the ultimate nihilist” – he is in love with Death (literally – in the Marvel Universe, important esoteric “concepts” like Eternity and Infinity have sentient physical embodiments, and Death is nominally-“female”) and typically wants to commit acts of universe-scale genocide in order to impress her. Really. 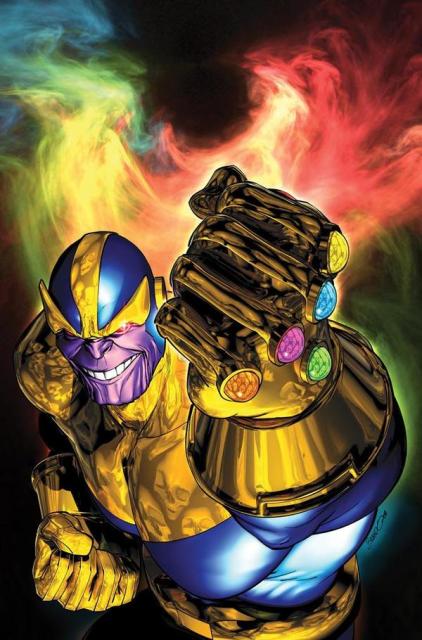 In other words, EXACTLY the sort of “too big for one guy” threat that Marvel Films’ has kept hinting would be the “only” thing that could bring The Avengers together for the movie. He’d certainly be right up there with also-speculated potential enemies like the Skrulls (aliens) H.Y.D.R.A. (Neo-Nazis, James Bond style) The Leader (Tim Blake Nelson at some point after he exits the “Hulk” movie) or A.I.M. (made scientists), but for whatever reason he never seemed to be at the top of anyone’s list. Hell, I’d never have even thought to consider him, mostly because he’s always been on that list of “Things I’ll Never See In a Movie.” But, then again, yesterday I never would’ve believed I’d see a live-action Infinity Gauntlet.

This is really happening.

Legendary Pictures is prepping another stab at an American-produced “Godzilla” feature, and apparently they’ve been showing THIS image around Comic-Con. It has an AR (Altered-Reality) stamp on it that makes a roaring sound and particle-effect fire when held up to a webcam that’s been teased on AR sites, so apparently it’s legitimate product. Question is, is THIS what the new Godzilla actually looks like? 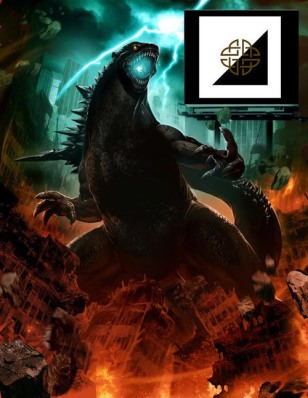 Because if so, color me 99% “sold.” I just want to see his feet – I’m hoping they’ve opted to accept that Godzilla just “has” humanoid proportions and not try and give him more “authentic” tri-jointed legs or feet like most re-design attempts have.