Question: Did the word “hipster” EVER have an actual definition in modern (re: last-ten-years-or-so) slang parlance? Or has it always been solely a way for nerds to call other nerds nerds?

http://cdn2.themis-media.com/media/global/movies/player/flowplayer.commercial-3.1.5.swf
And, yes, we talk a little more about “The Expendables.”

“Intermission” is a recap of Neil Marshall’s movies, and some choice quotes from my interview with him and his wife, actress Axelle Carolyn.

(I’ve had no home web access for about two days, so sorry if this isn’t “news” news to you.)

Remember that little speculation I engaged in on Wednesday regarding whether or not Kevin Bacon was playing “the” Sebastian Shaw in Matthew Vaughn/Brian Singer’s “X-Men: First Class?” Well, according to Harry Knowles – apparently based on a phone conversation with Singer – he is… and that’s not all. From the sound of it (and, yes, AICN so take it with the usual healthy skepticism) Vaughn is being allowed (for now) to make the exact opposite of what one would expect from a Fox-backed comic property.

Go read the whole AICN piece, but the “bullet points” are as follows:

Film is set in the Kennedy-era 1960s (making this the first Marvel movie to “line up” with the actual era in which the material was written!)

Bacon IS playing Shaw, and “The Hellfire Club” ARE the bad guys.

“The costumes will be far more comic-bookish than we’ve seen before.” One imagines this means the X-Men will be wearing something like their yellow and black/blue Silver Age uniforms, one hopes this extends to certain members of the Hellfire Club as well…

It IS apparently still a “prequel” to the other X-movies; so no Cyclops, Jean Grey, etc. as they’re too young in their films to have been around for this. Probably no Wolverine either, (though if there’s ONE thing Fox would probably force on them as a condition that’d easily be it.)

…PLEASE don’t let most of this be bullshit 😉

I mean, I’d happily settle for just a 90-minute text-crawl repeating “sorry about X-Men 3;” but this sounds really, REALLY promising.

Cable/web is down at home, so I’m doing this on the road. Happened upon the magical “we have wifi” sign at a small “artisanal market”/cafe type joint called “Coven” here in Salem, MA – where, already, it looks like a lot of y’all tourists are ALREADY descending, so have fun 😉

Anyway, check out what they got in this place: 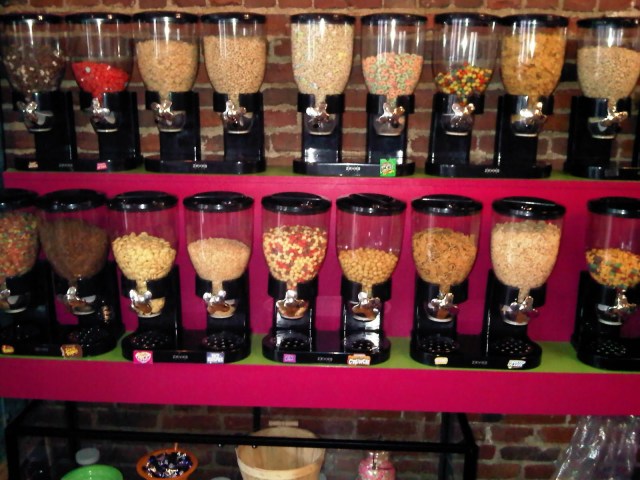 Yeah, that’s a “buffet”-type setup of BREAKFAST CEREALS (real ones.) The idea is you buy a bowl and then fill it up however. I’ve heard of places doing this, never seen one in the wild – AWESOME. Rest of the stuff ain’t bad either – “nostaglia-kitsch” kinda atmosphere goin’ on, lots of local /natural foodstuffs, board games and such on the tables, and what seems to be a good list of beer and wine. So glad I wandered in here. Place is on Essex St. in Salem, in case anyone currently-local is looking at this and it strikes yer fancy.

EDIT: just now actually looked at the menu. Sample of nicknamed items from the sandwich menu: “The Fraggle Rock,” “The He-Man,” “The Super Mario Brothers” (meatball panini), “The Truffle Shuffle.” What a find. I like these guys.

Somebody needs to get fired over this.

THIS movie should’ve been screening for weeks before it came out, just to get word out about all the “you’ve got to see this” insanity of it. Instead they barely even showed it to critics. Fools.

Anyway, just got back from it and it’s AWESOME – an authentic, no-bullshit splatterfest thats all about how much gore, blood, over-the-top death scenes and gratuitously-naked gorgeous women it can wring out of it’s thin premise (school of prehistoric super-piranha versus a lake full of Spring Break kids.)

I literally could not name a single film recently in theaters that spills as much onscreen blood in it’s whole running time as THIS one does during it’s extended ten-minute “piranha attack partygoers” sequence.

Riley Steel and Kelly Brook perform a nude underwater dance/lesbian sex-act with one another. For like two or three solid minutes. IN 3D. It is literally the single finest argument on behalf of the 3D format ever produced.

Christopher Lloyd is in it. So is Richard Dreyfuss. They are both awesome.

At this point, I’m not even sure what Matthew Vaughn’s “X-Men: First Class” (aka “X-Men 4: Sorry About X-Men 3”) is supposed to be – everyone knows it’s a “young Xavier & Magneto” story with mostly new characters and younger versions of the familiar ones, but no one yet seems willing to say whether this is a prequel like “Origins: Wolverine” (though casting new actors for Xavier and Cyclops when “O:W” had different ones would seem to negate that) or a reboot.

What everyone has been more-concretely wondering has been just what the “bad guy” is, since this is supposedly the pre-villain Magneto. The government? Other mutants? Mr. Sinister? Well, a dig through the various bits of casting-news turns up a fairly intriguing possibility.

Firstly, today we learn via io9/XMF that January Jones is apparently playing Emma Frost, aka “The White Queen,” (another role someone else already had in “Origins”) generally-speaking a role most fans begin and end caring about to the degree that she might wear “the costume.” But then again, remember that blip awhile back that Kevin Bacon was playing “a bad guy” in this, too? Well, did anyone bother to go look and see if his “bad guy” had a name? Well, he does…

If you’re an X-Men fan, that name alone ought to send something up your spine – especially coupled with the constant refrain of Frost being a “major” character in the film. In the comics, they were two parts of a bad-guy collective called “The Hellfire Club” – a bunch of Euro-flavored mutant aristocrats who’s organization had more than a hint of S&M/instutionalized-decadence hovering about it (re: corsets, whips and lots of anachronistic Victorian fashion) and who’s actions more or less kicked-off the infamous “Dark Phoenix” storyline (the Club and the story are both generously-“borrowed” references from an old “Avengers” storyline – the British spy show, not the comic.)

So is some version of THIS the “big threat” for “First Class?” On the one hand, it fits nicely into Vaughn’s ever-expanding wheelhouse. On the other hand, an even remotely-faithful version would be pretty far outside “typical” for the series or Fox superhero movies in general: In their original incarnation, the Club seduces Jean Grey into joining their ranks by using illusions to let her live out her “darkest fantasies.” Among those fantasies? Morphing into a female plantation mistress in the antebellum American South and taking fetishistic pleasure in personally whipping a disobedient slave girl – “played” in the fantasy by lone black X-Person Storm.

If someone were to ask me, “do you like ballet?,” my answer would probably be “no.”

…but, on the other hand, I DO like high-maintnance, unusually-flexible, control-freak Ice Queens with self-esteem issues the muscle-strength to kill a man with their calves, so… yeah, I guess I do…

Anyway, Apple has the trailer for Darren Aronofsky’s “The Black Swan,” which no one is even bothering to pretend isn’t better-known as “that movie where Natalie Portman fucks Mila Kunis.” The part you’re looking for is at 1:25.

Portman is hardworking a ballerina who’s waited too long for Her Shot, Kunis is the younger(?) natural-talent understudy who swoops in and effortlessly-overshadows her, driving her all kinds of crazy. So… “Showgirls” from Gina Gershon’s POV meets “Suspiria” crossed with “Mulholland Drive” and bit of “The Fly” right toward the end. On the one hand, looks pretty interesting. On the other hand, show-of-hands as to who’s already A.) sensing a Big Twist and B.) sensing that they know what it is? On the OTHER hand… yeah, I’m in.

For people who actually give a damn about movies beyond some kind of statistical horse-race (really, guys – when did moviegoing become fucking Fantasy Football?) watching boxoffice numbers is usually one of the most depressing things you can do. Which is why I rarely engage with it, save for circumstances like this weekend where the sociological implications carry a measure of interest. In any case, The Numbers are in…

Worthless, artless pandering to the lowest common-denominator “guy movie” (and the worst action film not featuring a badly-designed transforming robot)? #1.

Something brilliant, genuinely-inspired and one of MAYBE three movies from Summer 2010 that will actually MATTER a year (or even three months) from now? #4. Behind fucking “The Other Guys.”

Yeah, yeah, I know. Already assured cult status, huge on DVD, remember-what-happened-for-Fight-Club-and-Fear&Loathing, etc. And take solace in the “big picture” that this wouldn’t have even gotten MADE five years ago. All true.

But, still… “The Expendables?” Really? Humanity, sometimes you really just disgust me 😉

http://cdn2.themis-media.com/media/global/movies/player/flowplayer.commercial-3.1.5.swf
You bet your ass it’s that good.

Normally, I’m uncomfortable being a movie “advocate” in addition to “critic,” but I really am compelled to join the rest of the web in just PLEADING with anyone within earshot of this with even an inkling of seeing “Scott Pilgrim” to go give it some business this weekend. Yes, even if you’re “sick” of Michael Cera – he’s REALLY good in this. It’s an almost-certain modern classic – easily one of the best films of the year, a future landmark in terms of the “language” of western filmmaking (editing in particular) and just a spectacular piece of work… and it’ll be a real shame if it gets stomped all over – financially, anyway – by soulless, pandering “gender-niche” flotsam like “Eat Pray Love” or the unmitigated shitstorm that is “The Expendables.”