We only saw a tiny glimpse of Robocop’s chasis in that ED-209 viral thingee awhile back, either for the building of suspense or because they literally haven’t settled on a design yet. Now, Geekscape says they’ve got a concept model of the character… 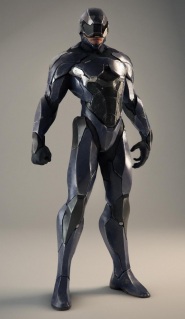 If this is the real thing (or something close) it’s pretty bad; but also completely plausible as a 2012 moviemaking decision: Too slick, not at all iconic, would never peg it as being Robocop if not prompted. Clearly designed to be “dynamic” in motion (re: a lot more jumping about from New Robocop, because that was such a big, gaping hole in the first one…)
Bottom line: This looks like a random mook from any of a dozen recent video-games, not the lead of a big movie.
July 31, 201217 Comments

In relation, obviously, to the recent unpleasantness…

http://cdn2.themis-media.com/media/global/movies/player/flowplayer.commercial-3.2.7.swf
The Escapist : The Big Picture : On The Subject Of Violence
July 31, 201255 Comments

In the spirit of this shocking, profound and in-no-way-just-rubber-stamping-what-already-eminently-evident news; I have decided to officially endorse my support of Mario Games, Pizza, 80s Metal and the first two “Spider-Man” movies.

Incidentally, this comes on the heels of the whole “Chik-fil-A” debacle, which is set to become even more absurd on Wednesday as “luminaries” like Mike Huckabee and Sarah Palin have encouraged their fans/followers to show pride in their bigotry by making August 1st “Chik-fil-A” day. Here’s an idea: I plan on making it a point to buy/eat some chicken from a competitor on that day as a form of counter-protest, and I encourage my readers/followers/fans to do the same. In fact, if anyone wants to Tweet a picture of themselves eating non-CFA chicken to me (@the_moviebob) on that day, maybe I’ll post some of them here.

This is one of those moments where the realities of 24/7 digital-age politics smash up against our stuck-in-the-1900s election choreography: EVERYBODY already knows that the Democrats, as a party, are nominally on the side of LGBT activism, but this will be the first time it’s ever been written into the “Party Plank” – a list of “official positions” whose convention-time adoption was the subject of much ceremony and fanfare in the days when news only traveled at the speed of train. Still, it’s big news and will be treated as such if it’s indeed going to happen. Important step, piece of history, where-were-you-when, etc.

What interests me is what this says about where the DNC’s collective “head” is at and what it means for how the election will actually play out. Three things immediately jump to mind:

1. Ambiguity Is Over
If nothing else, this is the Democrats aquiescing to a reality the Republicans set up way ahead of them: There’s no “middle ground” this time. This is now officially a “versus” election, where in spite of all the decrying of “divisiveness” you’ll hear from all sides division is the entire goal; casting the choice in such stark terms – Red vs. Blue, White America vs. Multicultural America, Nativist vs. Globalist, Secular vs. Religious, Reason vs. Belief, Tradition vs. Future, Family Values vs. New Normal – that as many would-be voters as possible are spurred to “get off the sidelines” and choose a side (or completely tune out, which can be just as useful to the same ends); with each team gambling that “they’re guys” will be more motivated to pack the polls. The DNC will be saying to pro-LGBT Americans “This is WAR, the prize is your rights, we’ve got your back, now get out there and kick some ass.”

2. The DNC Is Either Confident Of A Win Or Preparing To Lose
As a rule of thumb, politicians and political parties don’t take controversial positions during elections unless they feel they’ve already won or already lost. While taking this position probably won’t make THE difference for Obama’s numbers vs. Romney’s, it will probably make things tighter. Either way, while this is a politically “risky” move (more in a bit) it’s unquestionably a good move for Democrats long-term. LGBT rights, as part of the broader “social issues” package, is the #1 thing that seperates Generations X and Y from their parents and grandparents as a voting demographic; and this is the clearest signal the Dems have sent in quite some time that they’re the party for them. Even if they lose this election, it’s a step toward securing a bloc for next time.

3. Win Or Lose, The DNC Is Writing-Off “Red America.”
If you want a “macro” of the politics of this manuever, it’s that The DNC is willing to concede the previously-swingable (via Labor Union connections) “Blue Collar” demographic (in poli-speak: working-class white people, predominatly rural-rooted and family/church-centered) to Republicans for the forseeable future. Short-term risk, but long-term likely-payoff. The fact is, the “Blue Collar” demo is on-track for continued shrinkage in the visible future: America is becoming less white, less reliant on (domestic) physical-labor and less “rooted” workwise – the jobs/industries with growth prospects are the ones better suited to single, mobile professionals concentrated in urbanized areas. So while becoming “The Party of Gay Rights” will unquestionably drive a not-insignificant portion of the Blue Collar demo to The Right; it’s a demo that might as well be an endangered-species electorally speaking – whatever percentage of the white/midwestern working-class Democrats lose over this will be made up for (with interest) by the two demographic megaton-bombs hanging over the near-future process: Boomers entering retirement age (expectation-of/reliance-on Social Security and Medicare = Democrat votes) and the potential permanent game-changer of either “amnesty” for undocumented immigrants or the children of said immigrants hitting voting age (Republicans eagerness to racially-scapegoat Latinos ensures most of these votes will not go to them.)

Peter Jackson has confirmed that “The Hobbit” will go from being two films to a trilogy; with the originally-announced first two debuting over the next two Xmas seasons and the third hitting Summer 2014.

Details are vague, but supposedly this has been spurred by the material added (mostly “what was going on elsewhere in Middle Earth” from the LOTR appendices) to “flesh out” the events of the existing two films and tie things more directly to the events/characters that Tolkien later placed before and after Bilbo’s main adventure.

Whether or not that means “Hobbit 2” gets longer with the “traditional” ending still happening in Part 3 or if the third film will be the often-discussed “bridge film” to LOTR remains to be seen.

You might remember Eddie LeBron and Blue Core Studios for their ambitious “Mega Man” fan-film a few years back. Shortly after that, they announced they were going to take a swing at “Sonic The Hedgehog;” and with the film’s release date apparently approaching (last I’d heard it was going to be a short instead of a feature) there’s a new trailer – and yes, that’s actually Jaleel White returning to voice Sonic:

Sucks. But you knew that.

http://cdn2.themis-media.com/media/global/movies/player/flowplayer.commercial-3.2.7.swf
The Escapist : Escape to the Movies : The Watch
July 26, 201216 Comments

Their careers have never quite recovered from “The Matrix” becoming a massive overnight mega-sensation, prompting two unnecessary and innevitably-underwhelming sequels, and the the (IMO) underappreciated “Speed Racer” didn’t exactly put them back on top; but I can’t not respect people who make good on the dream of attaining permanent blockbuster clout and using it to do whatever the hell you want.

Now they’ve partnered with Tom Tykwer for a sprawling adaption of “Cloud Atlas,” which features a big cast playing multiple roles that stretch across multiple genres, styles, time-periods and realities. The film’s first SIX MINUTE trailer is now up over at Apple. Whoa.

“The Life of Pi” is based on a 2001 fantasy novel largely about the adventures a boy stranded on a lifeboat with a tiger for 227 days but also about meditations on the nature of God and The Universe as seen through the varying perspectives of Christianity, Islam and Hinduism. Below, the trailer for the movie your stoner friends and your “spiritual” friends will refuse to shut up about later this year…

I’m wondering how much of an adaptation this is. Without spoiling (commenters, try not to do that either – I still have to get around to reading the bloody thing) I recall people reading the book being furious about some sort of highly-unpleasant/unexpected plot twist that’s not even hinted at here; so we’ll see what happens if/when audience feel blindsided by something possibly less “whimsical” than what we’re seeing here.

http://cdn2.themis-media.com/media/global/movies/player/flowplayer.commercial-3.2.7.swf
The Escapist : The Big Picture : Worlds Within Worlds