This guy had a career any industry pro would envy, penning classics like “The Parallax View” and “3 Days of The Condor,” along with cult-classics like “Flash Gordon.” But he’s probably best remembered today as the creator/mastermind of the Adam West “Batman” series; through which he was either directly or partially responsible for the “Bat-____” device-naming convention, the Barbara Gordon version of Batgirl, the creation of Mr. Freeze and the rehabilitation of what were then largely-forgotten DC characters like Penguin, Riddler and Catwoman. In recent years he was part of the team behind the “Reel Geezers” YouTube series.

Semple lived a full life, certainly. We should all be so lucky. But I do think it’s kind of a shame that he didn’t live to see “Batman’s” long-awaited DVD release later this year. I’ve maintained for awhile now that fandom, which unpleasantly turned Semple and that series into a rhetorical punching-bag in the Dark Age 90s, was due to turn around on that once all of the episodes were more widely available (a lot of people have really only seen the movie, which is missing a lot of the smart/sharp satire the episodic series brought) and I imagine it might’ve been nice for him to see that.

Here’s something you don’t hear every day: “Damn, that Bible Movie kicked a lot of ass!”

http://cdn2.escapistmagazine.com/media/global/movies/player/flowplayer.commercial-3.2.12.swf
The Escapist : Escape to the Movies : Noah – Brave, Bold, Bizarre and Kind Of Brilliant
March 27, 2014Leave a comment

So… this looks really underwhelming. And surprisingly cheap, too. Say what you will about Michael Bay (who only produced this one), He’s at least got style, whereas Johnathan Liebsman really is sort of a rote point-and-shoot guy, at best:

Animators? Look, I get that deadlines and budgets are a thing and that studios want you to use facial-tracking algorithms instead of taking the time to animate a character’s expressions independently… but this thing (a direct result of that approach prevailing) where otherwise inhuman characters have overly-humanoid eyes, noses and (especially) lips? It just never looks good. Uncanny Valley and all that. Please, trust me: No plurality of filmgoers have ever expressed the following sentiment: “I was totally onboard with the premise of six-foot tall amphibians trained in ancient Japanese martial-arts until I noticed they’re mouths shouldn’t be capable of producing human-sounding syllables!”

Look. New origin for the TMNT? I can dig it – they aren’t exactly Superman in terms of modern mythmaking. But man, they really did just lift the (already shitty) “your father was a scientist working with the bad guy to create this” psuedo-predestination wankery from “Amazing Spider-Man,” eh? I’ll have more to say on that front in the near future, but until then enjoy freeze-framing that one shot where Leonardo actually looks sort-of cool.

A bigger look at “JUPITER ASCENDING,” The Wachowski’s first stab at big-scale space-opera, due out later this Summer:

Also, here’s a thing about “BOB’S BURGERS” from my new TV column, HI-DEFINITION.

http://cdn2.escapistmagazine.com/media/global/movies/player/flowplayer.commercial-3.2.12.swf
The Escapist : The Big Picture : Scarlet Unity – What Assassin’s Creed and Batman Have in Common
March 24, 2014January 10, 2017Leave a comment

“AVENGERS: AGE OF ULTRON” is location-shooting in earnest right now, which means we’ll be seeing set pics out the wazoo. Today, that means we’re getting a look at Wanda and Pietro in costume… but without the extensive special-effects work thats apparently set to be laid-over both of them in post-production. They look… alright. CBM has a decent collection of snaps, which also include guys wearing what look like props/stand-in suits for Ultron himself…

Quicksilver, at least, looks like an admirable attempt to make his comic look work in reality – lightning-bolts and all. Scarlet Witch, on the other hand… gotta be honest, I don’t love it. I guess maybe it’ll be visually interesting to have one Avenger doing the “street clothes plus glowy FX = superhero” look next to an otherwise all-costumes team, I just don’t know that I needed it to be this character. Yes, I know, they weren’t going to have her fighting in what typically amounts to lingerie – though I wouldn’t have complained if they had…

Of course, Quicksilver gets to benefit from how spectacularly awful the version of him in “X-MEN: DOFP” looks, whereas Scarlet Witch just sort of looks like she’s cosplaying Jane Lane. We’ll see. 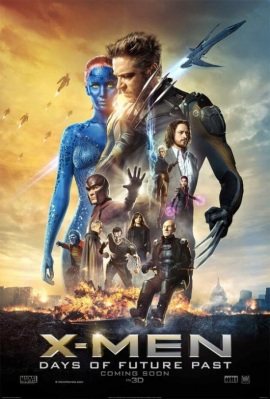 Bryan Singer’s “X-MEN” movies will always get a certain amount of credit for being good enough. When that first film hit, we were still in post-“BATMAN & ROBIN” fallout and Raimi’s “SPIDER-MAN” was still a year away. So despite Singer being at best a modestly competent stylist who can’t really direct action, the first one gets to be remembered as pretty-good while the sequel (also pretty-good) coasts by on the residual “whoa!” of seeing that Phoenix tease just before the credits rolled. Plus, the third one was so spectacularly terrible it made everything else look that much better until “ORIGINS: WOLVERINE” came out.

But none of that changes what an oddly underwhelming series this is, overall, and I imagine the consensus on it would be worse still if Ian McKellan and Patrick Stewart hadn’t continued to be such beloved movie-nerd icons today. “FIRST CLASS” is still the only entry in the franchise that’s legitimately great, and unsurprisingly it was 99.9% free of any connection to the rest of the series and the only entry to have been helmed by a truly great filmmaker in Matthew Vaughn. Everything wrong with the whole series can be summed-up by the cheezy new poster (on the right,) wherein everything else is just a tiny detail within a sooooo serious brooding Wolverine, while Jennifer Lawrence stares blankly as though she’d rather be doing anything else.

BUT! Credit where do, even though I’m still pretty certain that Singer coming back is a step backwards… the new trailer for “DAYS OF FUTURE PAST” looks pretty damn great. It’s still hurt by the lingering presence of everything still being carried-over from the inferior earlier movies (all the damn black rubber, Singer’s dreary po-faced gloom, Halle Berry) but yeah – it looks big-scale and cool and the Sentinels look great and it looks like Iceman gets to do his surfing thing so that’ll be fun to see; and it looks like Mystique has an appropriately big role… which is interesting, since it’s kind of an open-secret that she, Fassbender and others from “FIRST CLASS” had basically had to be contract-bullied into doing another one of these (Fassbender is apparently looking for “ASSASSIN’S CREED” to be his franchise ticket, not this.)

There’s supposedly a lot still being held back from this or deliberately edited-around by the trailers. If you look close, it feels like everything involving the “future” is from one or two scenes in the same basic setting, which would jibe with the pre-production word that the majority of the film is a 70s-set deal with the “FIRST CLASS” crew. What I’d really like to see is for the “change the future” part of this plot leading to a near-complete reboot: Use the “changed timeline” as an excuse to re-cast the “A-list” X-Men and re-start for the “present” carrying-over the best stuff from the FC timeline but abandoning any pretense of lining-up with the “Look, this is the best we were able to manage at the time” original Singer-timeline.

“DIVERGENT,” not so much.

http://cdn2.escapistmagazine.com/media/global/movies/player/flowplayer.commercial-3.2.12.swf
The Escapist : Escape to the Movies : Muppets Most Wanted – Not Easy Being Green
March 21, 2014Leave a comment
There are two kinds of people in the world: Thinkers and Believers.

“Big Picture” this past Tuesday was about “NOAH” (which I still haven’t seen, damn it), specifically regarding the amusing ironic of reflexively-irreligious film geeks turning up their noses at the feature without noting that it’s rather openly not fighting on the side they assume it is.

Case in point: Here’s Glenn Beck and company pissing and moaning about the potential of Darren Aronofsky’s film to undermine Biblical literalism. Perish the thought.

Below, the first teaser for the movie of “THE GIVER,” based on a book you may have been forced to read in middle-school about (all together now) a tween hero with a special destiny bracing against a dystopian future where free-will has been suppressed.

In fairness to Lois Lowry, this was written in 1993 when only most of it’s component parts were tedious cliches. Either way, I’m not sure how this premise is going to work in 2014 – but that involves SPOILERS so hit the jump for those…

Okay, so if you either don’t remember or don’t care about spoilers, the book of “THE GIVER” was pretty-much the main thing “EQUILIBRIUM” borrowed it’s setup from: A dystopian future society that enforces an emotionally-numbed “sameness” largely by excising the population’s collective memories of the past up to and including what color, music, emotion, etc “were.” Our hero is a 12 year-old who’s next in line to become “The Giver,” i.e. a guy who gets to be a human backup-drive whose mind will contain all those “lost” memories in case the leadership ever needs to look something up. He befriends the current Giver, and the two of them start thinking about kicking off a revolution against The System.

Here’s what I want to know (apart from why it doesn’t look like they’re doing it in black-and-white gradually transitioning to color when that’s pretty-much how the hero’s development is layed out in the book and also damn near the only way to make any of this look visually dynamic): Are they still working from the premise that this is the future of our world? Because if so, they’re going to have to change what the big inciting “Must Fight The System” issue is.

Short version: Every dystopia needs a big central horror underlying it in order to prevent the audience from asking “yeah but” questions about liberty vs security, and in “The Giver” it’s that The Community practices Spartan-style population control by euthanizing “aberrant” babies in infancy (example of aberration: identical twins). Problem: In the time between the writing of the book and now, the existence of prenatal genetic testing has made the basic premise of that (apart from being barbaric) wholly obsolete… or does The Giver remember everything about the earlier world except that particular technology?

From the looks of the teaser, it would appear that “save that baby!” is still the big Act III suspense-kickoff; but I’m given to think they might’ve been better acknowledging that the world has moved on and a new angle was necessary overall: Now, however good the movie is, they’re going to get swept up in a bunch of media nonsense about whether it’s a “pro-life metaphor” (which won’t be helped by the presence of Walden Media, which has connections to right-wing Christian activist Philip Anschutz, as producers.)