So, this week’s “Escape to The Movies” should be up later today at noon, as usual. But since I only get to video-review one movie at a time (usually) I wanted to get the “bigger picture” in as soon as possible: And since it IS August-13th-as-of-45-minutes-ago, I can tell you that the answer to the puzzel… which all of you smarties apparently got right away… was that “The Expendables” is absolutely shit, “Eat Pray Love” is almost-certainly shit, but “Scott Pilgrim” is awesome – like, top-ten-best-of-the-year awesome.

But seriously – “The Expendables” is SHIT. I cannot stress that enough. Shit. S-H-I-T shit. At some point in the future I’ll probably elaborate in video-form, but it can’t be repeated enough: It sucks. It’s “Transformers” bad. THAT bad.

And no, I don’t mean that it sucks in the awesome way that 1980s “guy movies” suck and therefore it’s ironically-awesome. I know that’s what you’ve heard, and you’ve heard wrong. It’s not an “homage” to bad movies, though it WANTS to be – it just IS a bad movie. Sloppily-directed, terribly written, and it doesn’t even play to the strengths of it’s assembled cast: Stallone and Rourke are both capable dramatic actors – why not give them anything to do? Statham and Jet Li are both skilled martial-arts stars – why are all the fights choppy over-edited MMA-looking crud? Dolph Lungdren and Terry Crews are funny – why not let them be? I’m struggling to think of anyone in this for whom it’s NOT one of the worst things they’ve ever done, well… except for Steve Austin.

Oh, and the action? It’s terrible. Guns get shot, guys fall over, pyro blows, that’s about it. Occasionally there’s an uninteresting fight scene. Remember all that glorious ultra-gore in “Rambo?” Yeah, not here. It was obviously shot with one eye on a potential PG-13, so it’s all quick hits and blink-and-you-miss-it inserts.

It’s a complete disaster, cynically banking on audiences either A.) actually still desiring this crap, or B.) thinking their getting Tarantino/Rodriguez-style crap-cinema-elevated-into-self-commentary when it’s really just leftovers. So guys, I’m beggin’ ya: PLEASE don’t let it pay off for them. Not when a real, honest-for-real game-changing masterpiece like “Scott Pilgrim” (which, incidentally, also has better action scenes) is out there, too… or, hell, when you could even just go see Inception again 😉

The meaning of this image will be revealed on Friday. Happy decoding. 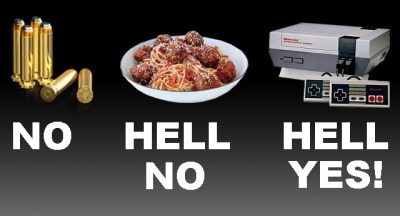 The last time I stuck hastily-assembled Mario photoshop stuff up on here, I wound up seeing it all over the web.

Let’s see if that can happen again…

I don’t know how many Paleontology buffs read this blog, but if you’re out there with me this is about as big as this stuff gets. Writing in the Journal of Vertebrae Paleontology, Jack Horner (the “rock star” of fossil hunters) and John Scanella have concluded that Triceratops (discovered 1889) and the similar-looking Torosaurus (1891) are not differently-sized cousins of the same species; but rather a child and adult specimen of the same animal. As Triceratops (aka “kid version”) was named first, both animals will now be known as such and Torosaurus will be stricken from the records.

The actual article is HERE:

This week’s Intermission kicks off a two-parter: “The Movie Nerd Bible: Part I”

No actors. No scenes. Nothing but a logo-reveal and Samuel L. Jackson reading the oldschool intro-copy (“And there came a day unlike any other day…”) but, still, there it is: A teaser trailer for an “Avengers” movie.

As you’ve no doubt read by now, a federal judge on the California Supreme Court has ruled that Proposition 8 – which “banned” gay marriage in the state after it had been previously legalized – was a violation of the U.S. Constitution, specifically the due-process and equal-protection clauses. The case was heard via a legal challenge filed by lawyers Ted Olson and David Boies, a liberal and a conservative who teamed-up specifically to bring Prop8 down. Funny story about that: Do those names together sound familiar? Well, they were opposing counsels in Bush v. Gore in 2000. There’s a movie in there somewhere…

Says the ruling: “Proposition 8 fails to advance any rational basis in singling out gay men and lesbians for denial of a marriage license. Indeed the evidence shows Proposition 8 does nothing more than enshrine in the California constitution the notion that opposite sex couples are superior to same sex couples.” 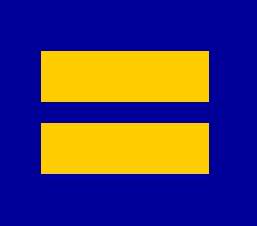 The ruling, crucially, does not automatically “reinstate” the original legality of gay marriage in the state, and the decision will almost-definitely be appealed or otherwise challenged. So on to the Supreme Court we go. Anthony “Swing Justice” Kennedy is about to have a VERY full inbox.

In any case, a landmark Civil Rights decision and unquestionably reason to celebrate for gay marriage supporters – unless of course you’re a Democrat up for re-election. See, they’re having a HORRIBLE night because they know that the innevitable homophobic backlash is going to give Republicans a big adrenaline shot. It’ll also play BIG with the “Tea Party” because it’s a textbook example of Big Government overturning the will of The People… or, rather, that’s what it might look like if you’re the sort of person who regards cosplaying as Sam Adams and shouting about Kenyan birth-certificates at a largely-disorganized protest rally as being roughly-equivalent to a Constitutional Law degree 😉

Incidentally, if there ARE any “Tea” folks reading this who’re feeling the pangs of righteous anger about this for whatever this week’s variation on “I don’t hate gays but _______” rational is; perhaps you ought take to heart these words from your movement’s Patron Saint. No, not the snowbound hillbilly, the other one:

“Individual rights are not subject to a public vote: a majority has no right to vote away the rights of a minority. The political function of rights is precisely to protect minorities from oppression by majorities : and the smallest minority on earth is the individual.” –Ayn Rand

Up until recently, “fan speculation” about what would occur in movie adaptations of scifi/comic/anime/whatever properties innevitably had to be projected through the prism of what would be most palatable to mainstream audiences who didn’t come up marinating in the stuff. It’s only logical, after all… except maybe it’s not anymore. In a world where Marvel Studios seems poised to “justify” the asymetrical realities of their “Avengers” project by trotting out esoteric macguffins like The Cosmic Cube or Infinity Gauntlet, who can say what’s “too strange” now?

With that in mind, take with maybe LESS than a bucketful of salt this purported “exclusive” from comicbookmovie.com, claiming the appearance of a certain disproportionately-important DC Universe character in the Green Lantern movie: KRONA.

Probably nothing but a fanservice-y minor beat. Probably. But if not, things could get really interesting really fast… (more after the break)

Short version: The Green Lanterns are space-cops whose main “big” job is preventing rogue individuals from causing cosmic-level threats. The inspiration for this mandate were the crimes of Krona, an ancient ancestor of the alien Gaurdians (the GLs’ bosses.) A mad scientist, Krona built a machine that would let him witness the origins of the universe – a giant hand reaching out of nothingness and unleashing “everything.” (Exactly whose hand that was is kind of a “big deal.”) However, in piercing the fabric of time to get his peek, Krona wound up setting off a cosmic chain reaction that split the one Universe into a MULTIverse – an infinite number of similar-yet-not alternate realities primarily differentiated by possessing gender, race or age “flipped” Justice League memberships and/or collections of “forgotten” heroes purchased from defunct rival publishers. Up until about 1985, The Multiverse was the defining “big idea” of DC Comics; allowing writers an excuse to make radical changes to established characters without rocking the “main” lines and the all-important plugging of continuity holes – “oh, that actually happened on Earth 2” is the DC version of “a wizard did it.”

So… yeah, probably just a fan-friendly nod to the arcana, since that’s some REALLY dense fan-wankery to expect in a production from the “superheroes? Do we have those?” Warner Bros. lot at this point. But given that Geoff Johns was at Comic-Con making cryptic teases about GL kicking off an Avengers-style shared-continuity run for DC movies… what if it’s not? After all, also turning up in the GL movie is Angela Bassett as perennial DC “linking character” Amanda Waller – who’d be REALLY easy to plug into the Nick Fury role, yes?

So, then, crazy radical thought for the day: How do you build a shared DC movie-continuity when you’re two biggest “players” (Batman and Superman) are going to be stranded for the forseeable future in the Nolan Bros. stand-alone, no-one-else-lives-here worlds? Sure, you COULD just have two other actors play Batman and Superman in a “Justice League” movie and keep it seperate, but fans would be furious…

…unless, of course, “that actually happened on Earth 2.”

Could that be Warners/DC’s gambit? “Shared universe? Yeah, that’s cool I guess. Have you seen our MULTIVERSE?”

Think about it: One passing line of dialogue from Krona (or whoever, really) about “different heroes on different worlds,” some quick glimpse of Christian Bale’s wheezing robo-suit Batman (and maybe Adam Wests too, while they’re at it) on a monitor/crystal-ball/whatever and PRESTO! Suddenly the sloppy non-continuity geeks hate becomes the  preposterously-dense, graph-requiring continuity that geeks LOVE.

Likely? Hell no. But if Krona really is in the movie, don’t expect me to be the last one to bring this up.

Thanks to everyone who reminded the me of this. Today is August 1st, 2010. Sound familiar?

Today is the day in “the future” where upon Lisa Simpson is supposed to marry Hugh St. John Alastair Parkfield, as foretold in 1995 by Episode 2F15. The nuptials were set to have occurred at 1:00pm this afternoon, and apparently would’ve worked out better had the wedding been held in church with God instead of outside in the cheap showiness of nature. (more after the break.)

Those who keep track of such things will of course note that we are now roughly 20 years away from Mrs. Simpson being elected as the first straight female president of the United States; approximately 2 years after which she (presumably) will, in a shocking act of nepotism, appoint her brother Bart to Chief Justice of the Supreme Court. And yeah, right up until Episode GABF12, that really did all more-or-less fit together.

Note: To save valuable time in replying to “Simpsons”-related posts, you may wish to copy-paste the following response in the comments: “Because it doesn’t air in the early-AM on Adult-Swim or Comedy Central, I haven’t actually watched “The Simpsons” in over a decade. However, I would nevertheless like to declare that it sucks and has not been funny since whenever I stopped regularly watching it except for that one I saw that actually WAS funny but must have therefore been an anomally.” Thank you 😉