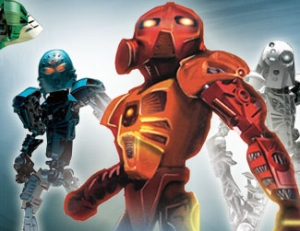 Check it out, folks! Yahoo has the new teaser-trailer for Michael Bay’s megabudget, July 4th opening movie adaptation of the popular Lego toy franchise, “Bionicle,” an action-adventure series following the heroics exploits of spindly, bug-eyed, improbably-skeletal robots. Tyrese Gibson and Shia LeBouf have the “human” lead roles.
Check it out here:
http://playlist.yahoo.com/makeplaylist.dll?id=1540534&sdm=web&qtw=480&qth=300
WOW! That’s what I call an action-movie teaser! I’m pumped! Nobody but nobody uses the men and machinery United States Armed Forces as props better than Michael Bay, and check out that visual scheme: Magic-hour shooting? Sunset-colored filters?? Dramatic lens flare??? THAT, my friends, is the kind of daring, novel re-invention that makes Bay one of our most innovative, completely unpredictable directorial talents today. 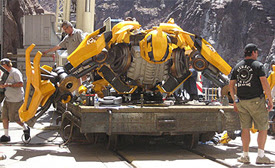 Now, I know what some of you are thinking: “The robots look stupid.” And to the non-fan, yeah… they do. But you’ve gotta understand, they’re supposed to look like that! Big and spindly and oddly-proportioned, with zero in the way of remotely-believable physical weight. And yes, they’re even supposed to look like their made of a billion random little peices that you could smash to bits with just a damn baseball bat; I mean, they’re made out of Lego! And didjya notice…
…wait, what?
…
This is supposed to be the TRANSFORMERS movie!??
Um… oh.
Shit.