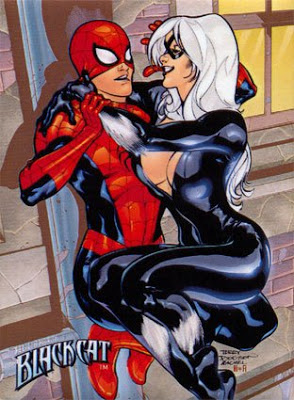 Heading out to a “Ninja Assassin” screening and a midnight of “New Moon” – since my press-invite seems to have gotten lost in the mail or whatever – but this was a little too on-topic to pass up.

The big “geek rumor” of the last few weeks has been that Sam Raimi and the “Spider-Man 4” production have been casting around for actresses to play Felicia Hardy, aka “The Black Cat.” Fans of breasts and those with financial stake in any manufacturer of Adult Female Halloween costumes, rejoice.
Character is a professional thief, sometimes equipped with magical “bad luck powers,” with the uncanny ability to creep about unnoticed in spite of a physique and costuming preferences that insure she enters a room about thirty full seconds before she enters a room, if you take my meaning. Mainly started out as a shameless “Catwoman” knockoff, but became a mainstay once artists’ enthusiam for drawing her (and fans’ enthusiasm for buying products bearing her… let’s say “face”) somewhat cornered writers’ into doing something interesting with her; in this case making her (pyschologically) into a female role-reversal on her own male fans: She’s obsessed with Spider-Man, but strictly as an object of fetish – standard-characterization is she’s got it bad for Spidey as-in “the guy in the red/blue costume,” and has an almost-violent lack of interest in who he actually is without it. For those playing at home, THIS is why Peter Paker’s life always has to be stacked to suck so much – so that we can still feel bad for him even with stuff like “consequence-free no-strings on-call copulation with stunning blonde sex-addict” also hanging around his background. (Speaking of writers, it took approximately 2 1/2 pages under Kevin Smith’s pen for Cat to “come out” as bisexual, right at the point when that was still somewhat novel for female superheroes. That’s a record, even for Smith.)
As is common with these things, even though NO ONE from the production has confirmed that this is even remotely true, “anonymous sources” (read: people’s agents) have been leaking rumors of pretty-much every age-appropriate female actress working as being “considered for the role.” Julia Stiles, Rachel McAdams and others got name-dropped right away, with Anne Hathaway (dear god, do I even dare DREAM!?) being the most-recent. The only reason you’re not hearing Scarlett Johansson’s name is that she’s already “Black Widow” in “Iron Man 2” and “Avengers.”
Left unsaid is how pissed Warner Bros. will be if this is true and they’re now “prevented” by not wanting to look dopey from the otherwise-obvious inclusion of Catwoman in the next “Batman.”