There’s a great, largely-unremembered Humphrey Bogart / Gloria Graham movie called “In A Lonely Place” that everyone ought to see. It’s an ultra-bleak film noir in which Bogie’s character, an alcoholic screenwriter suffering from what we’d now call PTSD, begins to put his life back together by romancing his hot neighbor (Graham)… only to see it all scuttled when he finds himself investigated for the murder of a female aquaintance. The tragic arc of the film is that it ultimately doesn’t matter if he’s innocent or not: The investigation reveals enough of his past and dark side that his few remaining friends/lovers realize that he very probably could have… and thus he’s done for. In other words, being accused and having no one doubt it is almost as bad as being guilty. 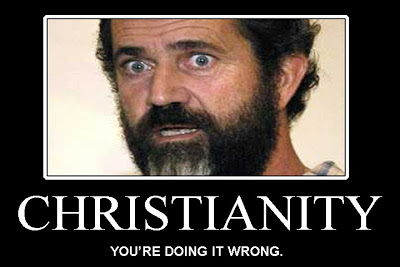 So I ask you: Regarding actor turned director turned religious-nut turned comeback-kid turned racist (prospective) woman-beater Mel Gibson… in terms of “is this the end?,” does it even MATTER if he actually “did it?” When you’re alleged to have punched your girlfriend in the face while she’s holding your baby and people’s reaction is pretty much “Yeah… that sounds plausible,” you’re DONE as any kind of viable public personality unless your name is Sheen, yes?
In any case, Radar Online now has the (apparent) audio of the infamous “raped by a pack of n****ers” conversation. WARNING: It’s a pretty hard listen: http://www.radaronline.com/exclusives/2010/07/world-exclusive-audio-mel-gibsons-explosive-racist-rant-listen-it-here

Going back to the whole “just as bad as having done it” thing, even if this were a fake or “out of context”… who’s surprised? Particularly given the pathetic, self-hating projectionism that seems to be at the root of it: The guy leaves his wife and seven kids for a hot young model… but SHE’S the “whore” and “bitch” for dressing provocatively. (From the tape: “I don’t WANT THAT girl!!!”) It’s the classic, good ol’ fashioned “damn the TEMPTRESS for ruining MY righteousness” routine, yes?

Well, given that this IS the same mind that gave us “The Passion of The Christ”… Well, are you at all surprised?