Before you ask: Yes, that’s supposed to be The Green Goblin. When people act incredulous at how protective comic-book fans get about costumes… THIS IS WHY. 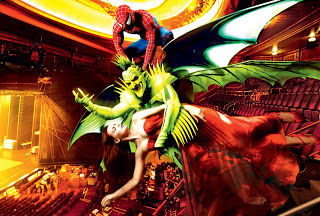 I’m not one for conspiracy theories, but the existance of the forthcoming “Spider-Man Musical” – directed by Julie Taymor with music by Bono and The Edge, no really – really does seem like something that can ONLY exist as a front for something else… or an outright CON, like in “The Producers.”

But WHAT would the con be? Is someone at Sony funneling money into this to make “Spiderlight” look better by comparison (it’s working…)? Is Marvel Studios trying to kill their own character’s brand so they can buy his movie rights back cheaper? Does Julie Taymor, or maybe Bono, hate superhero movies and this is all an elaborate gamble to kill the genre off a’la “Batman & Robin?”

Vogue has an Annie Leibovtiz fashion shoot up based around the shows costumes, and they look… wow. Now, firstly, the whole premise of this shoot is stupid: Broadway stage-show costumes like these aren’t meant to be viewed either this close up or static. But even taking that into account… Holy Crap.

In any case, here’s a picture of thoroughly-useless, inexplicably-popular villain Carnage as he appears in the show…

If nothing else, will anyone who still hasn’t come to term with The 90s sucking please just take a moment and drink that trainwreck in, at long last?

20 thoughts on “Max Bialystock has done it again!”