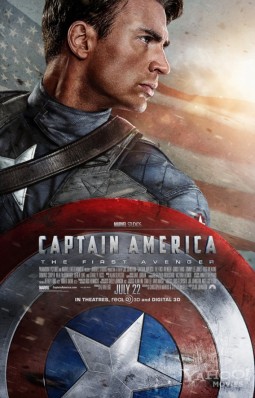 Apparently the final theatrical poster for “Captain America,” via Yahoo. (hat-tip to BAD)

I’m going to go out on a limb and assume that the GREAT BIG FLAG backdrop will be replaced by something else for the international “First Avenger” release version – or is Marvel just kind of rolling the dice on that at this point?

I don’t love that he’s not wearing the helmet – the marketing for this seems to be actively afraid of the mask, much in the same way “Thor’s” was wary of showing Asgard – but other than that it’s pretty damn incredible.

The early word on this is very good so far, though it probably helps enormously that it’s coming on the heels of “Green Lantern’s” spectacular crash-and-burn, as opposed to having to “follow” a better-recieved superhero flick like “Thor” or “First Class.” Then again, it opens up after both “Potter” and “Transformers,” so are people going to be burned out on Summer by then?

UPDATED: NEW TRAILER after the jump!

UPDATE: Here’s the new trailer, which one assumes will be running in front of “Transformers.”

Hating the generic metal-riff music. Loving everything else – especially that they pointedly spelled-out that HYDRA are Nazis, hopefully killing the “they took out the Nazis!!!!” bullshit thats been running rampant on the web.