NOTE: I’m not putting a spoiler-tag on this because Marvel clearly has no interest in it being a secret or surprise. It was in USA Today, even.

The thing that always bothered me about Marvel’s “Ultimate” side-universe is that it never lived up to it’s supposed intention of not only dropping the continuity-burden but also doing new and gutsy things with the established characters. “Ultimate” Spider-Man was probably the worst offender, segueing almost-immediately from telling “new” stories to basically being a “remixed” version of Spidey-continuity’s Greatest Hits. 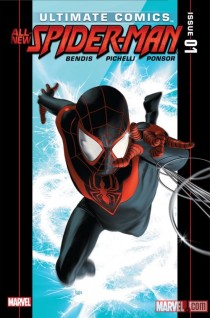 Amusingly, writer Brian Michael Bendis cites the infamous incident last year – where “Community” star Donald Glover launched a joke Twitter campaign to be cast as the new Spidey and was met with a ridiculous “I’m-not-racist-but” backlash from (some) fans who thought Glover (who is black) was actually up for the part.

Immediate reaction: Interesting choice, I like it. Will it be enough to get me back interested in the “Ultimate” line? Probably not, but you never know. I don’t know that I’m digging the outfit, but that’s a whole other minor thing.

31 thoughts on “The New "Spider-Man" Is Black/Latino”