I’ve had unkind words for the recently-released “Amazing Spider-Man” trailer; particularly it’s dissapointing-looking version of “The Lizard.” Well, Disguise.com has a look at the officially-licensed costumes from the movie, and if you click on over you’ll see that a lot of folk’s fears seem to be confirmed regarding the creature’s head: He looks like a scaly-faced human, as opposed to the “giant bipedal reptile” look many (myself included were hoping would carry over from the comics.) This is the lazy “Star Trek” school of creature-design, which assumes that a character can’t be related to unless it has a mostly-human face – y’know, since nobody was able to identify with the Prawns in “District 9” or anything…
BUT! The costume material does appear to show a design detail that I actually dig the hell out of, and wouldn’t mind seeing become “standard” for the character in other media: His hands. (pix after jump) 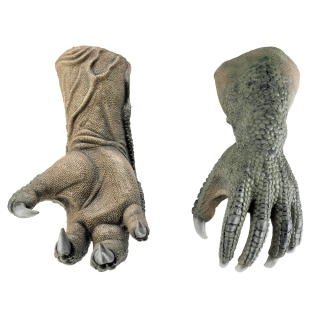 See what they did there?

Look again: The hand that grows-in “fresh” is more like an actual lizard’s (four digits, bigger claws) while the other one is more of a mutated-human’s hand.

That’s really cool – kinda wondering why no one has done it before (or have they?)

Would still look better with the lab coat.