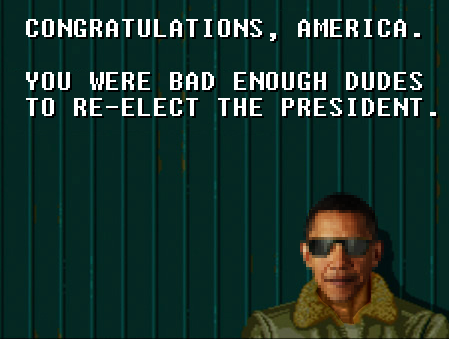 The Future, as it must, has defeated The Past.

Obama winning is important. His presidency being both historic AND successful is important to the narrative of history. But, more immediately, American voters have – whether by intent or incident – protected the Supreme Court from anti-choice, anti-science nominees for another four years and maybe longer… NOTHING was more important than that.

However, other things of profound importance were either decided or are in the process of being decided tonight. Among them:

Puerto Rico has voted, for the first time, “YES” on a non-binding referendum stating that they wish to become the 51st full member-state of The United States of America. Both Obama and Romney were on record as saying that they support and would sign off on the change, but if this really does get to the U.S. Congress expect a massive fight from Republicans – the zealously anti-Hispanic Tea Party wing of the GOP will not support a predominantly-Latino Spanish-speaking territory becoming an American State. In a very real way, this could be the biggest thing that happened tonight.

Marijuana has been legalized or semi-legalized in at least three more states than before by solid margins. This is the beginning of the end for Marijuana prohibition.

When the next session begins, more Women will sit in the U.S. Senate than ever before.

One of those aforementioned women, Tammy Baldwin (Democrat, Wisconsin) is also the first openly-gay woman to be elected in U.S. Senate history.

Four states had gay marriage legalization ballot initiatives on their ballots. Previously, such initiatives have either lost or won AGAINST marriage-equality 30 times with no victories. Tonight, all four were affirmed. The tide is changing.

The down side to all of this is that there will be no “wakeup call” to the Republican Party. The spin tomorrow morning will be that Romney lost because he was too moderate, not a “real” Christian and not a “real” conservative; and the push will be on to run a true believer next time. They will only become more intractable, more fundamentalist and more committed.

But, still, little by little we are improving. With each battle won over the forces of “tradition,” anachronism and superstition; persons of open-mind get one step closer to building the Superior America that we both need and – to be frank – deserve for the 21st Century.

127 thoughts on “What Part Of "Yes We Can" Did You Not Understand?”