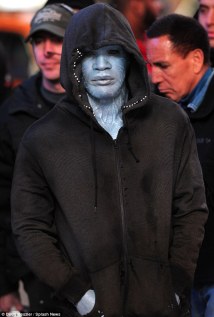 The Daily Mail has the first snaps of Jamie Foxx in his makeup as Maxwell Dillion aka Electro for “The Amazing Spider-Man 2,” restoring equilibrium to the movie-verse by stopping the slow drip of shockingly-NOT-shitty-looking/sounding-stuff gradually being revealed about the project.

“Hey, Jamie Foxx! Congratulations on headlining one of the biggest and most critically-lauded hits of the year – what are you gonna do next!?”

“I was thinkin’ I’d put on Arnold’s metallic-blue bodypaint from “Batman & Robin” to play second-fiddle to Less-Expensive-Robert-Pattinson in the sequel to a cheap reboot that even people who liked it largely shrugged off. Sounds fun, right?”

Here’s the thing about Electro: I love the guy. He’s one of my favorite Spider-Man nemesis, and he’s also one of the more prominent figures in the “powered-up bank robber” tier of Marvel Universe villainy. Problem is, the reason for both of those is pretty-much his iconic costume – without it, he’s really just another lightning-throwing electricity baddie – which probably wouldn’t “work” in live-action period and definitely won’t be a good fit with the po-faced “realism” aesthetic of Gritty Reboot Spidey.

Okay, fine, a redesign is in order (the shabby state of the pants and hoodie indicate they’re part of the “costume” at least for this scene, as opposed to “Mr. Foxx is chilly today”) but it looks to me like they’re going with a variation (almost-innevitably to be augmented with VFX) of his blue “charged up” form from Ultimate Spider-Man. Probably the easiest route to go (in the newer USM animated series he does both looks, but I wouldn’t count on that here) but somehow the prospect of “Spider-Man Versus Much Less-Powerful/Less-Interesting Doctor Manhattan” doesn’t exactly set my world on fire.

But okay, it is what it is. Now, let’s see what it looks like with the glowy CGI lightning stuff… and whatever they have planned for The Rhino.