UPDATE! The first five books are now available in Apple iBooks format for iPad, iPod Touch, iPhone and MAC. You’ll find the iBooks Store like on each books linked purchase page, or you can reach my iTunes author page HERE.

ORIGINAL POST:
Here it is, the one you’ve been waiting for. Unless you don’t know what I’m talking about, in which case, scroll down.

The first run of my new collection of ebooks curating the best of my earlier work, “The MovieBob Anthology,” is now complete with the newest and final volume, “GAME OVERTHINKER & BEYOND” – which includes transcripts of select classic OverThinker episodes and columns, articles and blogs about games and game culture from The Escapist, this blog and elsewhere. You can buy a copy in .epub format (compatible with most e-readers) from Lulu HERE for the low price of only $4.00 US.

The other volumes (previously posted about) include the following; all priced the same and in roughly the same layout (i.e. with “MovieBob’s” preceding the individual titles): 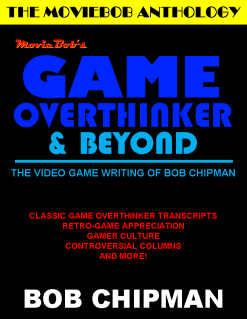 GEEK STREAK: Writings on the subject of “geek culture.” Includes the “Re-Tales” series from the old Intermission column, “Bat-Mitt vs Obamavengers” and “The 50 Most Boring Opinions in Geek Culture.”

REEL RETRO: Reviews and retrospectives of classic films, obscure gems and the great filmmakers behind them.

Also: Regarding formats – these are all in .epub format for now, which can be read on most devices (Calibre can convert it to .mobi for Kindle, for example.) I understand that many folks would prefer to buy them in device-native formats, and those versions are in the process of coming to be. Unfortunately, I cannot offer a timeline for when – that’s a decision that’s entirely up to Amazon, Apple, Barnes & Noble, etc.

Also: Since some have been asking: I very much want to do physical copies, but it’s not in the cards yet – there’s a big overhead for printing something like that, so I need to have a lot more things in order before that proceeds on even a limited basis.

NOTE: Production of The MovieBob Anthology was made possible in large part through fans and readers’ continuing support of The MovieBob Patreon. If you like what you’re seeing here and would like to see more of it, please consider becoming a Patron.