…are of Chris Evans’ burly stunt-double on a motorcycle: 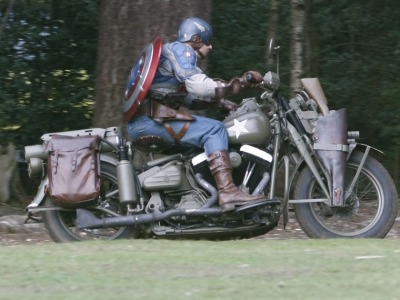 So… not exactly the approved-n-retouched “official” reveal Marvel Films would’ve preferred. For you young whippersnappers out there, this is pretty-much what ALL first-looks at genre projects looked like back in the days when the studios hadn’t yet learned how to micro-manage their own “leaks.”

But, yeah, it’s a “meant-to-take-a-pounding” version of the outfit on a guy who’s not “playing” the part, so don’t look to be blown away. The important stuff is in the details: It’s roughly the design we’ve already seen, but (apparently) at least partially comprised of fabric rather than spandex-armor (which, of course, didn’t exist in WWII) they eye and chin pieces are black, he has the FUCKING WINGS ON HIS HELMET FUCK YEAH!!!, the shield looks perfect, etc. Supposedly he starts his “career” in a USO “Mascot” costume modeled on the Golden Age comic outfit, then builds his own combat-ready version by repurposing (dyeing?) standard army gear, which is basically the idea here.

Okay, pretty cool in-context. Y’wanna see pretty cool in ANY context? Hit the jump (because while this has been “out there” for a little while I don’t want anyone complaining about quasi-spoilers…)

From the same site, here’s a pair of (presumably) bad-guy bikers (so they’re filming a chase scene?) 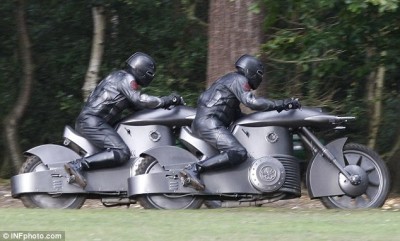 Dig the retro-futuristic design, right? But why would the Nazis have high-tech super-bikers? Well, look at this 360% ZOOM:

A skull with tentacles: The seal of HYDRA.

In the Marvel Universe, HYDRA is basically 007’s “SPECTER.” In traditional Marvel continuity, they start out as an adjunct of The Third Reich in WWII (though their supposedly as old as Ancient Egypt, like everything else in genre-fiction) transitioning into a fascist high-tech terrorist outfit in the “present,” frequently involved-with or even run-by various life-extended or “legacy” onetime Nazis like Baron Zemo, Baron Von Strucker, Arnim Zola and The Red Skull – at least two of whom are already supposed to turn up in “Captain America” already. You know, the sort of thing you’d need a whole team of superheroes to fight. Hm…

For those keeping track, this puts the list of significant Marvel Universe “continuity nuggets” confirmed to be part of this movie as follows: Howling Commandos, The Invaders, Bucky Barnes, Peggy Carter, Armin Zola, HYDRA, Yggdrasil/Asgard & The Cosmic Cube.

This is really happening.

4 thoughts on “First set photos of Captain America in costume…”