How utterly, perversely, delightfully, horrifyingly-wonderfully appropriate is it that – a mere day after it was re-affirmed that “Green Lantern” would be holding fast to Warner Bros. resolute continuity-phobia by deleting a planned Superman cameo – we now have visual evidence of… this?

Yes, “Justice League: A Hardcore Parody.” Not a hoax. Not a dream. Not an imaginary story. Possibly NSFW pics and further observations after the jump… 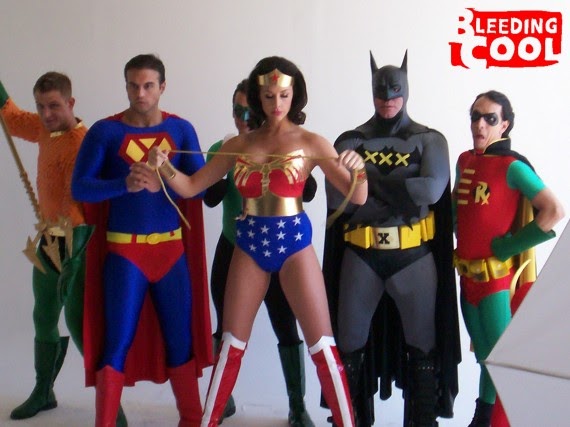 Two things – okay, two other things – jump out at me immediately about this:

Earlier report, also from Bleeding Cool, has the cast list. I won’t post the whole thing, but suffice it to say it’s something of an “all-star cast” if you follow the industry – or, rather, have a familiarity with the myriad entries in the “cheeky sex industry documentary” subgenre of HBO etc. productions. That’s Evan Stone (late of the “accidental football broadcast” scandal) in the Batman getup, for example.

Also onhand but not (yet) pictured: Jenna Presley as Lois Lane, Amber Rayne as Harley Quinn (not the live-action debut of the character, thanks to the “Birds of Prey” show), Tommy Gunn as “The General” and, yes, RON JEREMY (!) as THE PENGUIN (!!!) Catwoman and Zatanna round out the female cast.

This may end up being hysterical. The weak-ass title needs to go, though – or maybe it needs a subtitle… “Crisis on Intimate Earths?” “DP One Million?” “52… +17?” “Kingdom Come?” Anyone else got any?

8 thoughts on “"Justice" Is Coming (UPDATED)”