JustJared (which I despise linking to as it’s just the worst kind of “People”-esque paparazzi hit-baiting celebrity site, but fair is fair) has snaps from the “Dark Knight” set of Anne Hathaway in the ‘default mode’ of the Catwoman outfit that underwhelmed everyone a month or two ago. Wouldn’t you know, it actually looks  a lot better; which maybe means that “spy” photographers are now doing a better job of promoting this movie than Warners is (or maybe means that I was right…) 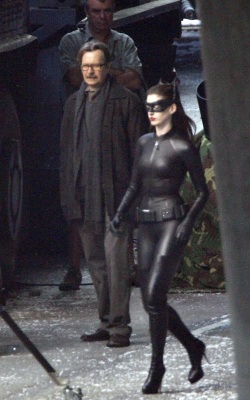 As it turns out, everyone and their great aunt was right that the silly-in-a-bad-way goggles seen in all the other photos convert into silly-in-a-good-way cat ears when not in use, but evidently left out that she’s wearing a wraparound eye-mask under them. Also, it appears that Nolan and company have at long last found one wholly-impractical superhero design-staple that they wanted to keep: Catwoman is doing her thing in high-heels (I’d be inclined to say they’re just to make her look taller; but in some of the shots she’s actually running in the damn things…)
Y’know what I like about this? Other than the obvious, I mean? That the basic design skips right over the more recent comics and “Batman Returns” and instead looks more than anything like a quasi-practical version of the getup from the Adam West series – which is otherwise the antithesis of the oh-so-serious mode that this whole series has been running in up to this point.