The second best news about “Oz: The Great And Powerful” – whose first teaser-poster just debuted – is that Sam Raimi is directing it, and it re-teams him with James Franco (in the lead role) and composer Danny Elfman. The Elfman connection is especially noteworthy, as he and Raimi (previously longtime buddies) supposedly had some kind of falling-out a few years back but apparently have patched things up a bit, which is very cool.

The BEST news is that, despite the “Alice in Wonderland” connection being made on the poster (see below), Tim Burton had nothing  to do with this… 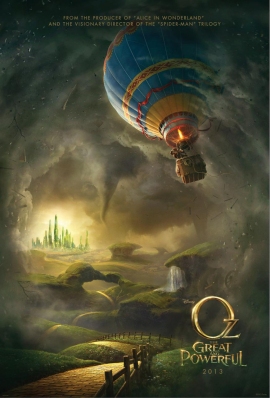 The film is a prequel to “Wonderful Wizard of Oz,” (presumably more in line with the general-pop-memory of the classic movie than the books) with Franco playing the con-artist/magician who winds up in Oz and gets wrapped up in an adventure that ultimately leads to his becoming The Wizard (or, rather, the Man Behind the Curtain.)

Frank L. Baum’s “Oz” books (which get really, reeeeaaaallllllyyyyy bizzare pretty quick after the one everyone is familiar with) are in the public domain (or are they not anymore?) and everyone in Hollywood is suddenly hot to get Oz prequel/spinoff/reboot projects of their own off the ground in a mad dash to beat the innevitable movie version of “Wicked” to the screen. Along with this there’s also a “Return to Oz”-style sequel cooking at Warner Bros., a CGI feature tied to John Boorman, a franchise-starter non-music remake of “Wizard” and several others in various stages of pitch/sale/greenlight. In addition, Anne Hathaway is attached to an Oscar-buzzy Judy Garland biopic that deals heavily with her turn in the original movie.

5 thoughts on “"Oz: The Great And Powerful"”