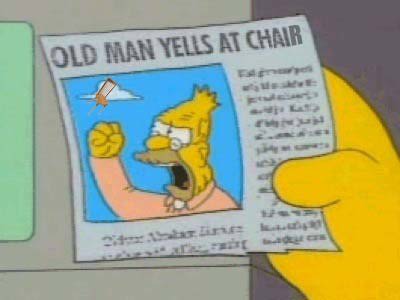 Having Clint Eastwood as Mitt Romney’s “surprise” lead-in speaker at the RNC should’ve been a slam-dunk: Dirty Harry walks out onstage and lays down some gravely platitudes (ideally ones that ignore Mr. Eastwood happening to be pro-choice and pro-gay marriage) while the assembled crowd basks in the glow of just about the ONLY remotely-relevant right-wing actor who isn’t a walking joke – or, rather, wasn’t one yet..
Just one small problem. Apparently, Clint decided to ad-lib… and nobody (understandably) had the guts to tell him “no.”

So, the night that was supposed to be all about introducing Mitt Romney to America… instead became all about an 82 year-old man performing a rambling, nigh-incoherent ventriloquism routine in which he conversed with an empty chair representing “Invisible Obama.” Social media (re: “The Twittersphere”) lit up immediately as the slow-motion train wreck unfolded… and even the Official Obama Twitter got in on the act…

The video is below. I warn you, it’s cringe inducing. No, not because it’s a Republican thing – it would be just as embarassing if, say, Michael Douglas did this at the DNC next week – because it’s just awful all-around, an all-time low and probably the most embarassing thing Eastwood has ever been associated with. Ugh, what a shame.

33 thoughts on “That Just Happened”