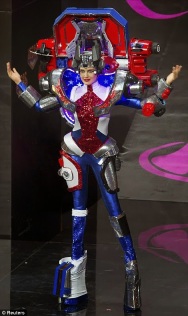 The Miss Universe Pageant held it’s preliminary National Costume Show a few days back, a pre-pageant publicity event where the contestants show off early builds of their outfits for the “National Costume” portion of the event – aka “dress up as the Sexy Halloween Costume interpretation of your country’s national identity.” You can imagine how this is supposed to go: Miss Sweden as a Viking, Miss Denmark as The Little Mermaid, etc.

Well, pictured at your right: Miss USA Erin Brady in her national costume interpretation of… Optimus Prime, leader of the Autobots faction of The Transformers. Which were, of course, were Japanese toys – but that’s really the least silly thing about this, isn’t it?

The pageant itself will be held on Saturday, so there’s presumably some time for them to possibly get her into something else… but I kind of hope they don’t. This is us, America. Might as well just wear it.