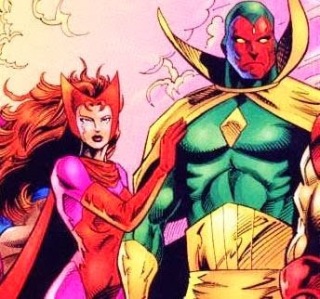 When you think about it, it’s kind of odd that Paul Bettany seemed to recede as a leading man just when he was blowing up a decade ago. I think a lot of us just figured that we also wouldn’t find a lot of reasons to leave the house if we’d married Jennifer Connelly.

In any case, his most prominent mainstream role for about the last decade has been as the voice of Tony Stark’s omnipresent digital servant J.A.R.V.I.S. in the Marvel Studios movies; and as of an hour ago the long-term planning logic of hiring an upscale-accented Brit who’s also movie-star handsome for that role makes a lot more sense: He’ll stepping in front of the camera in “AVENGERS 2: AGE OF ULTRON” as robotic superhero The Vision.

That Vision would turn up in the sequel was something of a foregone conclusion, being that his origins are tied to titular villain Ultron and his longest-running character-arc is a human/android romance with Scarlet Witch, previously announced and set to be played by Elizabeth Olsen (incidentally, I’d put serious money on her and Aaron Taylor Johnson’s Quicksilver showing up an establishing walk-on either in “CAPTAIN AMERICA: THE WINTER SOLDIER” or “GUARDIANS OF THE GALAXY.”) For a long time, the popular fan theory was that he’d be a robotic revival for Clark Gregg’s Agent Coulson (in the comics, Vision is created by Ultron using the brain-patterns of dead superhero Wonder Man and the chassis of the original android Human Torch) but “AGENTS OF S.H.I.E.L.D” has taken that character in a markedly different direction.

So the smart money now says that Vision (whom I imagine will still start out as a henchman and either go good by the finale or be trending that way for “AVENGERS 3”) is some permutation of J.A.R.V.I.S, which is what a lot of people assumed would be Ultron’s origin – even after it was revealed months ago that James Spader, not Bettany, would be doing the voice. In the comics, Ultron is the gone-wrong creation of Hank “Ant-Man” Pym, but he won’t be showing up (so far) until “ANT-MAN” which comes out after this. So where does Ultron come from?

Given that the SDCC teaser for the film was an Iron Man helmet violent morphing into Ultron’s head, I think it’s still pretty safe to assume that Tony Stark will be the human creator Ultron turns on in the Cinematic Universe version of his origin. It just makes the most sense, and my expectation remains that “AVENGERS 2” will probably wrap-up with the team in a dark place (“EMPIRE STRIKES BACK,” “WRATH OF KHAN,” etc) and Iron Man in particular left in a defeated position from which to make some kind of triumphant swan-song in Part 3 (RDJ’s full-time Marvel contract runs out after that point.)

But if he (apparently) isn’t “Evil J.A.R.V.I.S,” what is he? An Iron Man armor with a mind of it’s own? Some new thing they’ll make up just for this film? Plausible. My own pet theory – which I’ve been joking about for awhile but now feel like they just might actually do – is that, since Ultron in the comics starts out as more-or-less a Roomba that builds itself a humanoid body, movie-Ultron could well be DUM-E (aka “Dummy”), Tony Stark’s loyal but mostly-useless pet robot-arm from the “IRON MAN” movies. How fun would that be, for The Avengers next big enemy to be a clumsy workshop-bot that finally gets sick of Tony making fun of it?