Well, it had to happen EVENTUALLY, but I’m still sort of surprised to see it. Courtesy Transformers Movie Chronicles, here it is: FINALLY there’s (apparently) ONE decent-looking robot in a Transformers movie, and it’s Devastator: 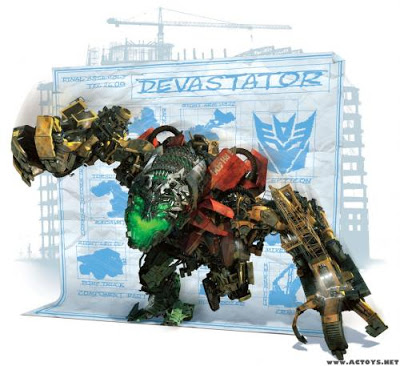 I’m actually a little conflicted, truth be told. On the one hand, it’s the FIRST mecha-design in this series so far that doesn’t suck on toast. Yeah, it looks like “generic CGI monster design #5” rendered in construction-vehicle parts, but at least thats better than “Terminator dressed as a pop-art junk sculpture for Halloween” like all the others. And you can see that he’s technically made up of about five seperate vehicles that snap together Voltron-style (in the original versions, they also transformed into individual robots on their own called Constructicons, jury’s out on if thats the case here) so they got that right. It’s just somewhat of a not-unexpected downer that he doesn’t look a THING like, well, Devastator. I mean, literally not even close. LESS close than Megatron, even. It’s like if they had a picture up marked “New Batman costume” and it was a picture of Darkwing Duck.
In any case, if this is anything like the first one you can expect to see this fellow turn up for about five minutes right at the end, rendered barely visible by Michael Bay’s attempt to pretend he’s making Black Hawk Down.