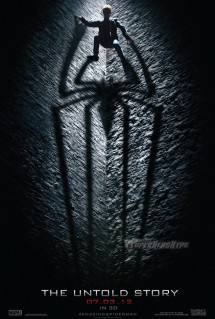 When I first saw this (origin: SuperHeroHype) as a partial-view on my smartphone I kind of loved it – great design, if nothing else. Then I scrolled down to the bottom and burst out laughing in public.
They’re really selling a revisitation of what may be (at least!) the 3rd most widely-known superhero “origin story” EVER as “The Untold Story?” The origin of Spider-Man is the definition of a TOLD story! It’s not even as though it’s a “prequel” to the previously-made movies and is going to reveal some “untold” part of that continuity; it’s just a new version of the same exact fucking story! That’s as close to a full-blown lie as a poster can tell!
But… whatever. What it does make me wonder (again) is what they might have meant when they put this together. What is “the untold story?” 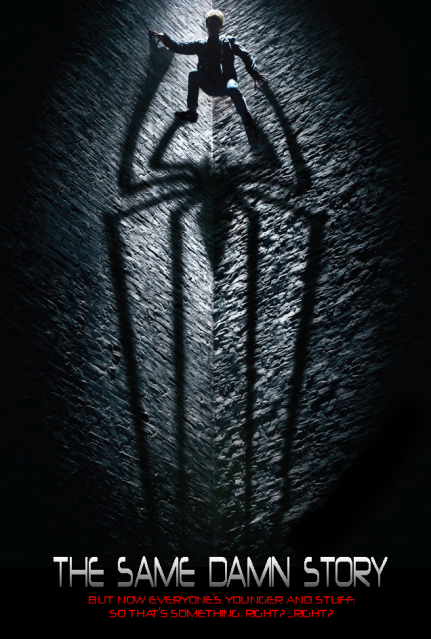 Of all the things that set off my alarm bells about the godawful first trailer for the film, the most glaring was that the death (dissappearance?) of Peter Parker’s actual parents – and satchel full of mysterious-documents they left behind – was revealed as some kind of big driving point for the plot (the big final line of the trailer was “We all have secrets. The ones you keep… and the one’s kept from you.”)
Of all the convoluted nonsense that Spidey’s backstory has accrued over the years, the detail that Richard and Mary Parker were actually Bond-style secret agents is one of the dopiest; but as part of a movie continuity it gives off the bad vibes of some “big thing” that ‘coincidentally’ connects all the current and future characters together as opposed to “weird super-science stuff happens all the time around here” worldbuilding.
Best guess? They’ll be revealed to have been “taken out” because of some nefarious doings related to Oscorp (the company’s name is on Gwen Stacy’s and Curt Conners’ labcoats in the trailer) which will in turn be the “source” of both The Lizard and sundry baddies to come (oh, and they’ll tease The Green Goblin at the end a’la The Joker.)
Am I the only one that hates when they do that? Joker being the Wayne’s killer in the Tim Burton “Batman,” Sandman shooting Uncle Ben in “Spider-Man 3,” etc? It always makes the “world” so small and narrow. I know why it’s there from a screenwriting 101 standpoint, connecting the threads and whatnot – but it kills out the “scope” factor of having the various villains and/or other “super” people existing independently of the main character until their paths cross. Like… in “Captain America,” I LOVE that the Cosmic Cube has zero connection to Cap until The Red Skull has it, and that even then it has nothing to do with why The Skull is what he is; or how S.H.I.E.L.D. is not exclusively devoted to looking for Thor, they’re just “there” and they’ve brought an archery-themed superhero with them “because why not?” It makes everything so much more expansive and adds so much more potential.